“Thee who endures pain, shall endure success. Not worrying about his past mistakes, but moving on and learning from them. Waking up each day to live the life that you were called upon will soon be written in stone, so take every opportunity that is brought before you to turn a dream into a reality. To look back and say those were the best years of my life.” -Nolan Ritter

I am 20 years old and currently a junior at Southeast Missouri State University in Cape Girardeau, Missouri. I surround myself with two older sisters and an older brother. If it wasn’t for my family and friends I wouldn’t be where I am today. I am an Exercise Science major with plans to go on to Physical Therapy school. I am also the secretary of the (C.M.O) Constantly Making Other’s FIT club at Southeast Missouri State University. I am a firm believer of how you are raised when you were little and who you surround yourself with as you grow older will determine your future endeavors. I first started to realize that I wanted to do something in the fitness industry when my brother who is currently in the United States Navy started to take me to the local gym when I was 15. Being the skinniest person out there all my life, I knew it was time to put some mass on my bones to be successful in high school sports. Throughout my years of middle school and high school I was involved in many sporting events: traveling soccer, baseball, football, traveling basketball, gym hockey, and taught myself how to play tennis. When it comes to sports I am most the most competitive person out there and simply just want to win. Coming from a family who supports me, I moved away to college in August of 2011 and took advantage of the gym at the student recreational center. I would be in the gym every night lifting while other college kids would be out partying. As mentioned above, some friends and I started a health and fitness club at the University called Constantly Making Other’s (CMO) Fit. July 16th, I began my fitness modeling career as I shot my first professional shoot in Miami, Florida with Luis Rafael Photography. I joined the (NPC) National Physique Committee and took all my research and knowledge over the years to the stage for my first time May 11 at the Mike Francois Classic in Columbus, Ohio. With it being the biggest show in Ohio and a National Qualifier, I finished 11th out of 40 competitors in the Men’s Physique division. My next show is in St. Louis at the NPC Midwest Naturals on August 24. I am currently in the process of making my own fitness app called Stacked, which will be launched into the Apple market in September.  I have big plans in the future for the fitness industry as I plan on getting my pro card and also to take on the fitness modeling industry. Being mentally prepared for the long marathon will help power your way thru those tough times that lie in front of you. I wake up each morning knowing I will do what others won’t, so tomorrow I will do what others can’t. I thank God day and night for giving me the drive and motivation to help others live a long and healthy life. 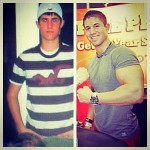 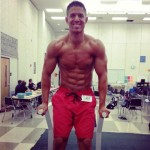 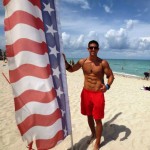